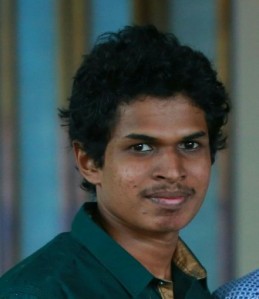 I got a chance to watch “ ozhivudivasathe kali” or “ an off-day game” with the director Sanal Kumar Sasidharan in India Habitat Centre followed by a discussion with the director himself. An off-day game is brutally realistic and strongly political movie which contains numerous subtexts. The way movie expands is absolutely poetic when it comes to the last 50 minutes which is a single shot. I was amazed and then agitated when I heard the first comment or response after the screening of the movie in Habitat Centre. “I am confused, what do you really want to convey by this movie?”-this was the first response by an elite class delhite. For me there was no confusion at all, it was crystal clear what the director intended to convey through the movie. I believe, that was a response from the hesitant state of mind to agree on facts and create darkness by closing eyes.

Talking about subtexts from the director’s words, this movie will continue talking until justice served to the oppressed. An off-day game is a classic buddy movie which tells the story of five friends on an election day go to a lonely resort in a forest, booze and try seducing a woman who comes there for cooking chicken for them. The mood of the movie changes or the ‘point of no return’ happens when one of the friends who is an NRI called another black and insulted him of his color. 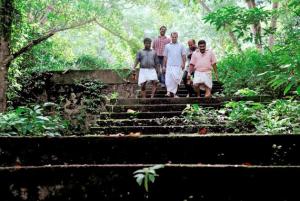 Then the movie swings into another dimension which was built from the very beginning by the writer-director Sanal Kumar Sashidharan carefully and poetically that of dangers of casteism and racism. That change of mood was officially announced when the character named ‘dasan’ recites the poem by an African:

When I Grow Up, I Black,

When I Scared, I Black,

When I Sick, I Black,

And You White Fella,

When You Born, You Pink,

When You Grow Up, You White,

When You Go In Sun, You Red,

When You Cold, You Blue,

When You Scared, You Yellow,

When You Sick, You Green,

Back to the subtexts we were talking about, there is a character in the movie who is called ‘namboothiri’ a member of elite caste made the judge for the old school game they play after get drunk in which ‘dasan’ will be the robber and other three are king, minister, and cop respectively. The punishment they give to dasan was highly metaphorical to the current political contexts in our country. I saw RohitVemula in dasan, I saw Omar Khalid, IromSharmila, and many of the Kashmiris and all oppressed people in the country in place of ‘dasan’. it’ll be confusing to people who don’t care about humanity and self-obsessed, they think that’s abrupt and brutal climax, I would like to say its shouting in very loud and clear voice which will make sensations in our minds and ask us to get up and stand up for upholding our rights and fight with the oppressed until justice is served. To me, an off-day game is not a mere movie but a piece of artwork that keeps talking and shouting and never stops at all.