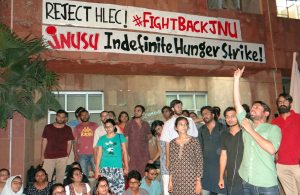 Two groups of Jawaharlal Nehru University (JNU) students are sitting on an indefinite hunger strike in protest against the punishments awarded by the university in connection with the controversial 9 February event.

The hunger strike began at midnight after the students took out a torchlight march from Ganga Dhaba to administration block, which has been the venue of protest ever since Kanhaiya was arrested in a sedition case over the event against hanging of Parliament attack convict Afzal Guru during which anti-national slogans were allegedly raised. The university had earlier this week announced punishments to various students on the basis of recommendations of a five-member probe panel.

“The administration thought that if the action is taken during exams there will be no protests from students. Please do not question our intelligentsia, we can write our thesis while sitting on protest and clear our exams,” Kanhaiya said.

The protesting students also include the ones who have not been punished but are agitating in solidarity.

The ABVP members who are sitting on a separate strike, are agitating demanding the withdrawal of penalty on Saurabh Kumar Sharma who filed a complaint against Kanhaiya.

Sharma, who is the lone ABVP member in JNU students union has been slapped with a penalty of Rs10,000 for blocking traffic.

The ABVP is alleging that the university has equated “nationalists” and “anti-nationals” while deciding the punishments and has set a bad precedent by criminalising “patriotism”.