Yes Earth does speak. In this entire Universe as of Earth’s knowledge
Earth is the only part of universe which has the Consciousness and
conscience about Itself and its surroundings. Some part of the Earth
does Hear and See and some part of Earth can Talk and Think. 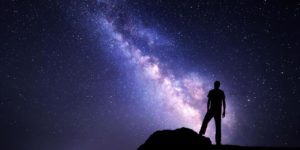 Its just been very small period that we all developed the Conscience
and started using most of the Earth(Natural Resources) for our
over-needs.

This development from the last 500 years is only because of our over
enthusiasm towards our natural resources and some developments in
science. I know after few centuries we may realise that we should keep
the progress of the Consciousness from one generation to other and
move further to more sustainable and inclusive of every creature both
plants and animals for next Billion Billion Years.

Ok., If you didn’t agree, just follow the example,

There are two male-female pair who has a message of peace to deliver
to their village people and has stuck in a big desert which is big
enough to cross it for 900 years. They have some food(can be stored)
which will be enough for only 1000 years for 10 people for judicious
use only. So they have the following options..
*will have to have few children so population will be less so food can
be enough for 1000 years.
* will have to develop some technology which increases their chances
of survival will be more. It means they can built some mode transport
which should increase the speed of journey to cross the desert. And
the transport should not degrade the food. And the technology should
not harm those survivers and all the survivers will die in between
their journey.
*Should develop some health procedures to prevent from any diseases.
*Should not fight among themselves so seriously so that everybody will die.
*Should have some good entrainment.
* Should not waste the food.
At last they can pass the message to further generations and
continuing the journey to cross the desert. And finally they can
deliver the message to their village people who will be the future
generations of their village ancestors. So the village will be in
peace for Billion of Billion years.

This story is just analogous to our story. So be happy, use less
resources, be care about population growth, develop technologies which
comforts our lives and make inclusiveness for all creatures like
plants and animals.