The ongoing protests in Jawaharlal Nehru University campus demanding a fast probe into the disappearance and return of Najeeb Ahmad, a Muslim student of School of Biotechnology, and immediate judicial action against ABVP culprits made a huge outcry among the students and teachers of the campus. But the heinous silence and snail pace of moving procedural formalities of JNU administration gives cause for suspicion about its legitimacy, which has been in stand still in recent past. The series of protest programs in the campus could not open the eyes of Sangh-minded administration and hostel wardens to the seriousness of the matter. Students came in large numbers to protect their colleague from the assaults of ABVP goons, at the time of physical violence and thereafter, and throughout these days amid anger and suspicion, to protect the academic spaces from the grip of Sangh Parivar Goondaism. The later events of hate mongering by ABVP against Muslims comments like “Muslims are terrorists” and “Pakistani Mullas” could be seen in the common rooms and bathrooms of the hostel. JNUSU has been called for an immediate strike at the campus till the return of Najeeb and assurance of punishment and debarring against the culprits. 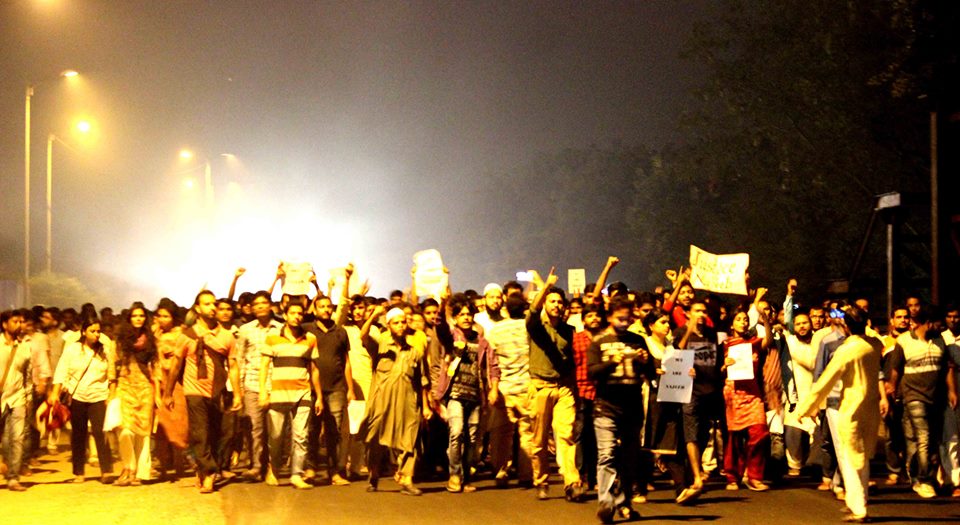 According to the Delhi Police, a case under section 365 (kidnapping with intent secretly and wrongfully to confine a person) of IPC has been registered at the Vasant Kunj North police station on the basis of a complaint by his parents. At the peak of students’ confrontation at the main gate of JNU on Sunday night, the Proctor assured the JNUSU on filing a complaint in the same police station as soon as possible by the administration. Meanwhile, students themselves came forward to submit their deposition in front of the Proctorial Committee on Monday since 11 AM. But throughout the day, the administration has not made any concrete attempt to file a complaint against the culprits. In meantime, they have come up with a press statement blaming Najeeb for the violence and declaring him as the “accused”. Even after the meeting of JNUSU leaders with the Vice Chancellor, Jagdish Kumar, the administration relied mostly on the statements of Saurabh Sharma, former JNUSU Joint Secretary from ABVP.

In the meantime, many rumors are spreading among the students by ABVP like minded people to divert all the efforts of JNUSU. To strengthen a united move against the administration and Delhi Police to take immediate actions, JNUSU has come up with a pamphlet yesterday noon with a detailed note on the incident:

On 14/10/204, around 11:30 pm, some three students went to the room of Najeeb Ahmed, MSc Biotechnology (first year), Room No 106, Mahi Hostel to campaign for hostel elections. At this time, there was an alleged scuffle which took place between Najeeb and the others. Hearing noise and commotion, when the residents of Mahi reached Room no 106, they witnessed three students assaulting Najeeb. At this juncture, the residents seeing a group of students howling and coming towards Room No 106, for security concerns, locked Najeeb in his room. The G4S security personnel have upon reaching the hostel opened the door. Despite the presence of security personnel, some 10-15 students brutally attacked Najeeb. After the attack, the residents again locked Najeeb in the washroom and blocked the entrance, waiting for the Hostel warden to reach. As the senior warden, Dr. Sushil Kumar reached the place, they started moving to the Warden’s office on the ground floor. Despite the presence of the senior warden and G4S security Najeeb was criminally intimidated and communally targeted by the same group of students on the way to the warden’s office. The JNUSU President and other hostel residents who had come to stop the attack were also assaulted by the same 10-15 group of students.

In the Warden’s office, in front of the Senior Warden Dr. Sushil Kumar, and the other wardens Dr. Somyajit Ray and Dr. Arun Srivastava, these group of lumpens threatened Najeeb Ahmed for his life and limb. They repeatedly told the warden not to initiate any proceedings and leave Najeeb to them and then they would not spare him. They also hurled patriarchal and communal abuses at Najeeb in the presence of the wardens. Despite being present at the site all along the G4S did not collect any video evidence of the assault and the Warden failed to intervene to stop the assaulting students.

It is extremely disconcerting that from the morning after the attack, Najeeb Ahmed is missing since 11:00 am, 15/10/2016. A complaint in this regard has been filed in the Vasant Kunj Police station by his family members.

Unsatisfied with the administrative unreadiness to look at this grave issue, students organized a mass delegation and protest march to Vasant Kunj Police station at 10pm from Ganga Dhaba. The Assistant Commissioner addressed the students by stating the formal investigative measures taken by his team. But he remained silent on the arrest of the accused ABVP culprits, who are scot free in the campus. JNUSU come up with its latest pamphlet today noon by briefing protest programs:

After receiving such a response from the administration, hundreds of students of this campus marched to the Vasant Kunj thana to file a complaint of assault. After futile talks with the administration, JNUSU has now filed a complaint along with all the eyewitnesses of this incident. Hundreds of students present at the Police station yesterday have also signed a complaint letter demanding urgent action on part of the Delhi Police.

Najeeb, who was subjected to group violence and now missing, is a student of this campus. The administration’s response is shamelessly callous and reeks of partisan bias, evading all norms of institutional responsibility and accountability. JNUSU has today called for a complete University Strike. We need to take all possible measures to pressurize the authorities to realize that we cannot afford to sit silently when a student amongst us is missing for the past four days and the authorities have taken no action so far and have no answers till now.

Various levels of protests are going on in front of the Administration block, in which Najeeb’s mother and brother are actively participating. The inability of administration in taking care of its own students raises many concerns over the legitimacy of the Vice Chancellor, Rector, and Proctor. Students are demanding to break the silence of these people in power, and to come in front of the protesters or resign from their posts. The continued assaults of ABVP over Muslim students on the campus, even in the name of India-Pakistan cricket matches, must be addressed in the background of mounting fascist Sangh terror all over the country. The incident resembles Dadri Hindutva mob lynching of Muhammad Akhlaq and needs much attention to the imminent actions to ensure safety and security of Muslim students. The demand for Minority deprivation points in the JNU admission and setting of Minority Cell in the campus still remains to be achieved. In the words of Heba Ahmed, General Secretary of YFDA, a non-political organization of Muslim students in JNU:

Lynching of Najeeb Ahmed and anti-Muslim attacks in JNU

The pattern of ABVP-RSS-BJP constructing a discourse of Hindu victimhood is again at work. This time, instead of targeting a Dalit student where they will be forced to be defensive, they have made a frontal attack on a Muslim. They chose their target for the lynch mob carefully: a Muslim student who is new on campus, who is friendless and defenceless. ABVP has alleged that Najeeb made a religiously motivated attack on their cadre campaigning for hostel elections. The fact that Najeeb was brutally lynched, even in front of the hostel warden, has been twisted and erased. The fact that a graffiti saying “Muslims Are Terrorists”, “Pakistani Mullah Go Back” have been left in the common room and the washroom of Mahi-Mandavi Hostel is being completely ignored by the administration. That even now, the hostel in question resembles a war-zone in which Muslim students still feel intimidated and threatened is not being considered. The administration has consistently refused to file an official complaint in this matter. It is high time that Muslim students come forward in large numbers to seek justice for Najeeb, to assert their presence and to emphasize that nobody can bully or intimidate us.

It is high time to ensure the safety and freedom of speech in the academic spaces, which has been targeted by the ruling regime and its administrative and associated machinery throughout the recent past. The slogans of “Justice for Najeeb” and “We are Najeeb” contributing a new vigour of consciousness in the country with an emerging space of solidarity and unity against Sangh agendas.