“I learned early that crying out in protest could accomplish things.” [8]

“The more I began to stay away from home and visit people and steal from the stores, the more aggressive I became in my inclinations. I never wanted to wait for anything.” [15]

“I don’t care how nice one is to you, the thing you must always remember is that almost never does he really see you as he sees himself, as he sees his own kind.” [28]

“…the collective white man had acted like a devil in virtually every contact he had with the world’s collective non-white man.” [181]

“For the white man to ask the black man if he hates him is just like the rapist asking the raped, or the wolf asking the sheep, ‘Do you hate me?’ The white man is in no moral position to accuse anyone else of hate! Why, when all of my ancestors are snake-bitten, and I’m snake-bitten, and I warn my children to avoid snakes, what does that snake sound like accusing me of hate-teaching? ” [245]

“Here was one of the white man’s most characteristic behavior patterns — where black men are concerned. He loves himself so much that he is startled if he discovers that his victims don’t share his vainglorious self-opinion.” [243]

“The black masses want not to be shrunk from as though they are plague-ridden. They want not to be walled up in slums, in the ghettos, like animals. They want to live in an open, free society where they can walk with their heads up, like men, and women! Few white people realize that many black people today dislike and avoid spending more time than they must about white people. This ‘integration’ image, as it is popularly interpreted, has millions of vain, self-exalted white people convinced that black people want to sleep in bed with them – and that’s a lie!” [278]

“The black man in North America was economically sick and that was evident in one simple fact: as a consumer, he got less than his share, and as a producer gave least. The black American today shows us the perfect parasite image – the black tick under the delusion that he is progressing because he rides on the udder of the fat, three-stomached cow that is white America.” [320]

“The whites of the younger generation, in the colleges and universities, will see the handwriting on the wall and many of them will turn to the spiritual path of truth.” [348]

“It isn’t the American white man who is a racist, but it’s the American political, economic and social atmosphere that automatically nourishes a racist psychology in the white man.” [378]

“The white man is not inherently evil, but America’s racist society influences him to act evilly. The society has produced and nourishes a psychology which brings out the lowest, most base part of human beings.” [378]

“Where the really sincere white people have got to do their ‘proving’ of themselves is not among the black victims, but out on the battle lines of where America’s racism really is — and that’s in their own home communities.” [383]

“Any person who claims to have deep feeling for other human beings should think a long, long time before he votes to have other men kept behind bars – caged. I am not saying there shouldn’t be prisons, but there shouldn’t be bars. Behind bars, a man never reforms. He will never forget. He never will get completely over the memory of the bars.” [155]

“…among all Negroes the black convict is the most perfectly preconditioned to hear the words, ‘the white man is the devil.’” [186] 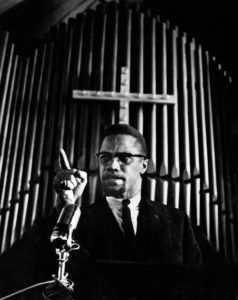 “Since Western society is deteriorating, it has become overrun with immorality, and God is going to judge it, and destroy it. And the only way the black people caught up in this society can be saved is not to integrate into this corrupt society, but to separate from it, to a land of our own, where we can reform ourselves, lift up our moral standards and try to be godly.” [250]

“We reject segregation even more militantly than you say you do! We want separation, which is not the same! The Honorable Elijah Muhammad teaches us that segregation is when your life and liberty are controlled, regulated, by someone else. To segregate means to control. Segregation is that which is forced upon inferiors by superiors. But separation is that which is done voluntarily, by two equals — for the good of both!” [250]

“Negroes don’t even like snails! What they’re doing is proving they’re integrated.” [281]

“The black man in North America was sickest of all politically. He let the white man divide him into such foolishness as considering himself a black ‘Democrat,’ a black ‘Republican,’ a black ‘Conservative,’ or a black ‘Liberal’ …when a ten-million black vote bloc could be the deciding balance of power in American politics, because the white man’s vote is almost always evenly divided.” [320]

“Whenever any group can vote in a bloc, and decide the outcome of elections, and it fails to do this, then that group is politically sick.” [321]

“The government has departments to deal with the special interest groups that make themselves heard and felt. A Department of Agriculture cares for the farmers’ needs. There is a Department of Health, Education and Welfare. There is a Department of the Interior – in which the Indians are included. Is the farmer, the doctor, the Indian, the greatest problem in America today? No – it is the black man! There ought to be a Pentagon-sized Washington department dealing with every segment of the black man’s problems.” [321]

“‘Conservatism’ in America’s politics means ‘Let’s keep the niggers in their place. And ‘liberalism’ means ‘Let’s keep the knee-grows in their place – but tell them we’ll treat them a little better; let’s fool them more, with more promises.’ With these choices, I felt that the American black man only needed to choose, which one to be eaten by, the ‘liberal’ fox or the ‘conservative’ wolf – because both of them would eat him. [At least] in a wolf’s den, I’d always known exactly where I stood; I’d watch the dangerous wolf closer than I would the smooth, sly fox. The wolf’s very growling would keep me alert and fighting him to survive, whereas I might be lulled and fooled by the tricky fox.” [380]

“It has always been my belief that I, too, will die by violence. I have done all that I can to be prepared.” [2]

“Any number of my former brothers felt they would make heroes of themselves in the Nation of Islam if they killed me. …I knew that no one would kill you quicker than  Muslim if he felt that’s what Allah wanted him to do.” [323]

“And in the racial climate of this country today, it is anybody’s guess which of the ‘extremes’ in approach to the black man’s problems might personally meet a fatal catastrophe first – ‘non-violent’ Dr. King, or so-called ‘violent’ me.” [385]

“Every morning when I wake up, now, I regard it as having another borrowed day.” [388]

“When I am dead – I say it that way because from the things I know, I do not expect to live long enough to read this book in its finished from – I want you to just watch and see if I’m not right when I say: that the white man, in his press, is going to identify me with ‘hate.’” [389]

“They asked if I knew what ‘conscientious objector’ meant. I told them that when the white man asked me to go off somewhere and fight and maybe die to preserve the way the white man treated the black man in America, then my conscience made me object.” [207]

“America’s most dangerous and threatening black man is the one who has been kept sealed up by the Northerner in the black ghettos – the Northern white power structure’s system to keep talking democracy while keeping the black man out of sight somewhere, around the corner.” [277]

“The American Negro has been entirely brainwashed from ever seeing or thinking of himself, as he should, as a part of the non-white peoples of the world.” [352]

“New York white youth were killing victims; that was a ‘sociological’ problem. But when black youth killed somebody, the power structure was looking to hang somebody.” [368]

“I believe it’s a crime for anyone who is being brutalized to continue to accept that brutality without doing something to defend himself.” [374]

“If the so-called ‘Christianity’ now being practiced in America displays the best that world Christianity has left to offer – no one in his right mind should need any much greater proof that very close at hand is the end of Christianity.” [376]