Multiple narratives are now emerging after many months of hadiya’s suffering (a fate of being sent from prison to prison in her own words) and almost 4 months after the latest episode of her incarceration in addition to the already existing hostile and violent right wing propaganda and the equally wicked and rabid epistemic assaults of left/liberal and rationalist/atheist anti muslim racists.

Some of these new narratives are extremely dubious as saw in the arguments assembled in the latest Open Magazine article and there is no need to dissect them further. Apart from such mischievous attempts, there are some other narratives which looks more honest and credible in the first face though it is stunning that it needed many months of hadiya’s suffering in resistance and much efforts from elsewhere were needed to make her visible as a political priority to these actors.

In all these narratives (one strand aimed at the savarna recapture of the moment and the other to reinstate a so-called “bahujan view”) the muslim political “outfits” would be a crucial component responsible for her sufferings as their hindutwa “counterparts”, so it goes. One wants to criminalize the “bahujan father” as violent patriarch suppressing his daughter, the other narrative would like to save him from all responsibilities bringing his own sufferings in the forefront and leaving hadiya almost unmentioned or made into an abstract. Another visible agreement within all these narratives is the disappearance of Hadiya’s agency as a muslim woman, exactly what the state and brahminic court also do through the extinction of the sufferings of her husband Shafin, who went through immense loss and despair standing courageously with her risking his life. Rather he was made into a villain (either through some explicit references of his character or implicitly through the references on his association with a muslim organization which is already vilified as an anathema to the secular social fabric of the state or as a threat to national security). 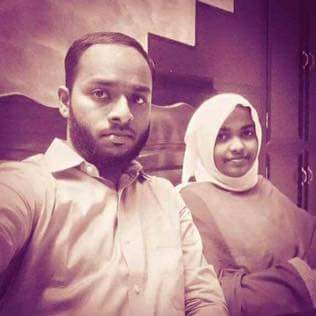 There were nearly no attempt in these vast literature of polemics to humanize Shafin. His extremely disenfranchised background, his mother’s life long struggles to give him a decent education and a job overseas which now almost went in vain subsequent to the Indian state and the courts’ agenda to “punish” him for connecting to a “Hindu girl”, the threats to his life, etc . are never mentioned in the stories produced. What is mentioned always is his association with a dangerous muslim “outfit”. what is the “crime” of this group itself do this affair? Is it to be only helping hand in his fight for justice, without which he would have been failed a defenseless legal battle, separated from his wife permanently taken to one of that ghar vapasi torture camps? Or is it the crime of standing with hadiya when she needed an external support to live in her faith? Never an explanation was needed for the listeners as it was already there in the air of hindu majoritarian state.

What is important to think at this moment is why Shafin miss all the humanity that someone wish to reinstate for Asokan (who definitely has his own responsibility and role in the oppression that Hadiya is undergoing)? Why one of the most ruthlessly violent organization in the whole subcontinent operating even before its formation as a nation which also now runs the entire show escape the condemnation it deserves being equated with an assertive muslim organization? What disease infected the kerala public sphere and almost all alternative spheres will adequately explain this phenomenon?