The stalemate at the Satyajit Ray Film and Television Institute (SRFTI) continued for the second day after 14 female students were expelled after weeks of confrontation with the college authorities over a new segregation policy that does not allow girls to enter the boy’s hostel. According to students, the college authorities issued the ‘draconian’ order that tramples on their ‘freedom of expression’ a few days ago and it was implemented almost overnight.

This is to inform you that a huge number of students are severely aggrieved by the events that have been unfolding for the past few months in this institute and even after our persistent requests of dialogue through letters from the students’ representatives and several verbal requests from a multitude of students; and demands on several issues such as basic living conditions, which are horrendous; our academics, our faculty, our syllabus, etc.; no positive step has been taken by the authority who has been very conveniently shying away from all responsibility towards the students. In the circumstances, the students are left with no choice but to express their dissent by walking out of classes and indeed showing it publicly in hope that conversation towards a positive note regarding the resolution of these numerous issues.

Now, since the students didn’t allow the director and the administration to enter the administrative building, the director was forced to speak with the students where she pointedly threatened two students and said to them, “You don’t talk at all! You remember, you can’t talk.”, etc. and she clearly said to everyone, “Today you people are questioning segregation, tomorrow you will have questions about your syllabus.” Right to syllabus being a fundamental student right, this attitude is highly questionable. This is how the administration has behaved for the past few months where the institute has turned into a highly undemocratic space where there is no inclusion of the students whatsoever in the matters that actually concerns them. The administration has been coming up with draconian rules every other day and threatening the students constantly with expulsion from the institute, calling the police to threaten the students, imposing fines, etc.

We cannot allow such authoritarian and dictatorial attitude from the institute where they can corruptly pass their time here and fill their own pockets, completely exploiting the students and totally ignoring their welfare.

Regarding the segregation of hostels, the students’ body is of the stand that this is a logistically and morally problematic directive. It is a gender based segregation which does not consider the work practices and conveniences of the students involved at all. The administration wants all the male students to shift to the Old Hostel and the female students to shift to the New Hostel and also wants to put a stringent time limitation for entry and exit in either hostel for respective genders. Since this is a filmmaking course the work hours and the work groups of students are not stipulated to any fixed hours. It is very usual with the gender ratio across the batches that the “team” doing a project as part of their curriculum will generally have a majority of male students and minority of female students. It is never an all-girl team; which is why the to-and-fro exchange between both male and female students is completely unavoidable at any hour of the day. A female student director may have to collaborate and supervise four other male core crew members in four different rooms. In that case this segregation becomes an insurmountable hurdle in the course of the project and in turn of the curriculum as well. It is a gender biased decision where women are being made to feel inferior. Raising the topic of security of girls, they are trying to cage the female students within one building addressing that single space to be the only safe area for girls. Not only free movement is being restricted, they are also suggesting that if any kind of harassment occurs in any place within campus, then the victim will be blamed for not living in their designated boundaries. Hence the student community stands in opposition to this prejudiced decision.

We want the expulsion notice served to the fourteen girls to be immediately rolled back and the police to be sent back from the campus premises. Till that time, the students have decided to go forward with a strike with a firm resolve that it will not be taken back until our demands are met.

1. Living conditions are horrendous inside the institute.

● Broken furniture as well as inadequate number of furniture.

2. Fee hike with every batch and imposition of high monetary fine for shortfall in attendance and delay in submission of fee (the reason for most of these cases is lack of communication from the administration and non-declaration of results of the previous semesters). The system is enabling people to buy their attendance which in turn completely devalues merit and discipline in one sense. Even in case of medical emergencies they are burdening the student with a fine of Rs.1000/- for every 1% of attendance.

3. Academic projects being removed and modified, making the academic quality of the course weaker, such as the removal of the very vital Playback project and modification of the 4th semester Short Fiction Film which is the only project where all students get to work in a studio set up and that is extremely essential for the wholesome development of film students.

4. No increase in academic budget over six years although the fees are being considerably hiked every batch.

5. Tie up with industry professional and production houses for work post the course is almost nil, Placement Cell needs to be set up.

6. The prop, costumes, art and furniture departments are in very bad condition. The same things are being reused since the last decade or more. Any instance of parallel shooting leads to complete chaos due to lack of inadequate resources. This issue has been left unaddressed in spite of multiple requests from every batch.

7. The TV course has been started even when there were not enough classrooms for them. TV is a separate wing than film and resources from film wing are constantly being shifted to accommodate TV courses. This includes faculty as well as infrastructure. Despite all the above inadequacies new short term courses are being announced with the same amount of resource (faculty, set, hostel).

8. Students Welfare Centre needs to be set up

9. Lack of Faculty. Some faculties are not willing to take classes at all. The teachers come to class late or even postpone classes themselves and faculties of film course have been shifted to TV course which lead to this dearth. 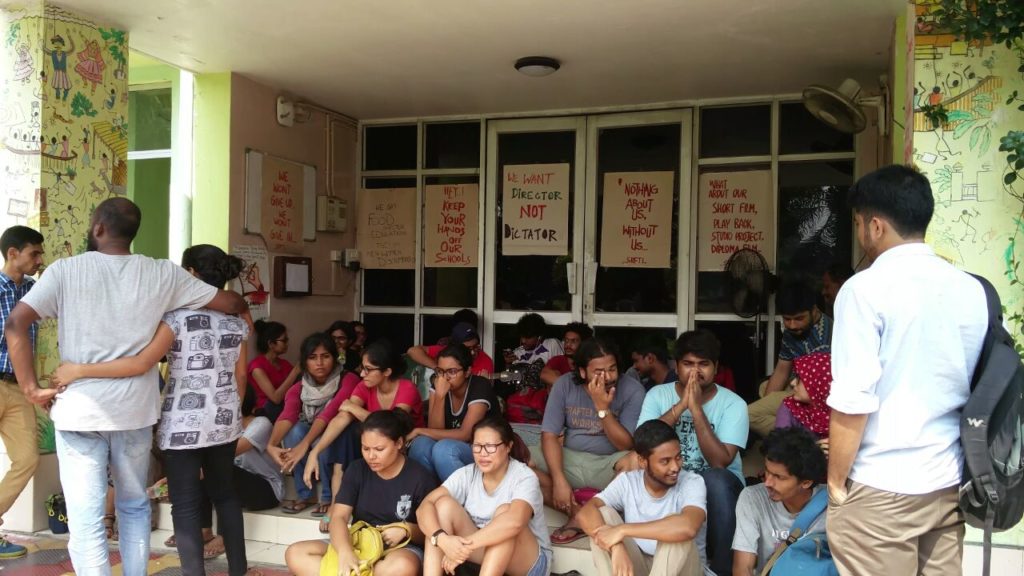 10. Major corruption going on around the campus (instances of building a decorative wall for a huge sum of money beside the administration building in spite of being malfunctioning studios and equipments lying around that are of no use, etc.)

12. The students are not allowed to bring in assistants, actors or any other person who might assist us in our creative endeavors and projects. This affects the ethos of the film institute on the whole.

1. The Director has refused to entertain any dialogue with us and is continuously threatening us of dire consequences if we continue asking questions. The police have been brought inside the campus to instill fear so that the protest ends.

2. Around 14 students face rustication from the institute and ten other students face suspension from the hostels in addition to FIRs filed against all of them. These FIRs have been filed just by handpicking a few students from the entire student community. Some of them who are not even present in the campus for quite some time let alone the mentioned date in the notice.

3. There is a complete administrative paralysis here as the Director does not want to take responsibility for any of her decisions and keeps telling us that decisions have to be taken by someone above her.

4. We demand cancelling all the expulsion orders with immediate effect and that a democratic channel of dialogue be opened with someone who can actually take decisions.

5. The institute is under complete lock down and the students are living in fear of their future in the institute.