THE ASSAULT AND DISAPPEARANCE OF NAJEEB:

In October 2016, Najeeb Ahmed a first-year student of M. Sc. Biotechnology was assaulted by ABVP members. On the morning of the assault (namely, on 15th October 2016), Najeeb went missing. Today it has been 365 days since Najeeb’s disappearance. The case to bring justice to Najeeb has been passed on from Delhi Police to the Crime Branch to an SIT appointed by the Home Ministry and then now to the CBI. The CBI has been investigating the case since 2 months. But the investigation has not moved forward even by an inch. Many student organisations across universities in Delhi, Aligarh Muslim University, and many citizens in the capital have protested time and again at Vasant Kunj police station, at the MHRD, at the Delhi Police headquarters in ITO, at India Gate in Delhi, in Najeeb’s hometown Badaun, even in Lucknow. Two days ago we were protesting at the CBI headquarters for two days and one night. But the number of protesters has also started dwindling.

THE TARGETING OF NAJEEB’S MUSLIM IDENTITY:

A year ago, a few of us kept insisting that Najeeb’s vulnerability must be seen as another example of how Muslims in India are being attacked, that he must be seen as A MUSLIM STUDENT. The clues behind Najeeb’s Muslim identity-as-vulnerability were several: (1) Najeeb was attacked after ABVP assaulters accused him of slapping them first, and this was because Najeeb had apparently got “offended” by a saffron thread on Vikrant’s wrist. This action-reaction theory in which a minority individual is actually blamed for the attack perpetrated on him is a common feature of Hindutva. (2) Najeeb was threatened in unmistakably communal terms. “72 hooron ke paas pahuncha denge” was the threat given to him by ABVP and “Muslims are Terrorists” was scribbled on a table in the same Mahi-Mandavi hostel where Najeeb lived (3) The former Lt. Gov. of Delhi, Najeeb Jung, claimed that Najeeb has been spotted in Darbhanga (known for terror modules) (4) The most crucial aspect: over the past year, it has been repeatedly “reported” by the media that Najeeb has gone away to join ISIS. The fact that Najeeb disappeared ONLY AFTER GETTING ATTACKED has been totally undermined. 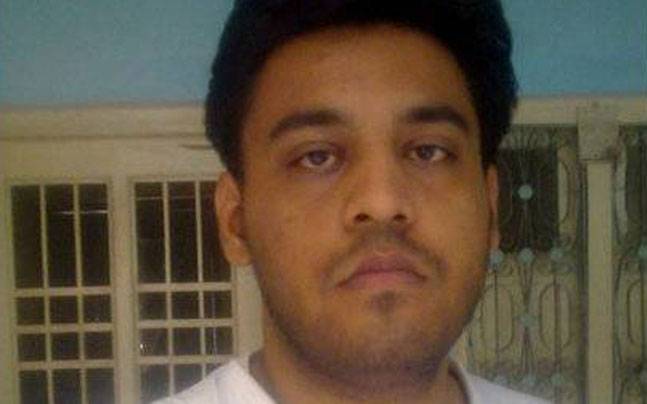 But the section of supposed progressives in JNU has consistently refused to acknowledge Najeeb as a Muslim. There has not been a single note on this by the JNUTA, JNU’s carrier of left-liberal values. Even after one year, there has been no attempt by the JNU Students’ Union to hold any protest or solidarity meeting or anything, to remind the campus about what had happened to Najeeb a year ago. The campus seems to have demonstrated the fact that public memory is very short indeed. Even last year, during the protests for Justice for Najeeb, the AISA-SFI led JNUSU seemed only interested in saving their own skin from any kind of criticism. This was especially condemnable in light of the fact that THE FORMER JNUSU PRESIDENT, MOHIT PANDEY, AND NAJEEB’S FORMER ROOMMATE AND SLL&CS CONVENOR, QASIM, (BOTH FROM AISA) WROTE AND SIGNED VERY DAMAGING LETTERS WHICH SINGLED OUT NAJEEB AS A CRIMINAL. (These letters are available in the public domain!) THE FORMER JNUSU HAS NOT MADE ITSELF ACCOUNTABLE TO THE LARGER STUDENT BODY FOR THESE GLARING ACTS OF INSENSITIVITY.

The ABVP assualters are roaming free and are further intimidating more students. Some days ago, the same criminals who beat up Najeeb also created a ruckus at a protest event held by BAPSA against the rape of a Dalit-tribal girl in Orissa. They even called a Dalit student, a BAPSA member, a “terrorist”. Because of what happened to Najeeb, Muslim students are now even scared to apply for studying in JNU. This is very regrettable, considering that Muslims are already the most under-represented group in higher education institutes in India. Muslims in India are being victimised everyday at the hands of Hindutva criminals. In this day and age of Hindu fascism, even universities like JNU are no longer safe havens for Muslims. 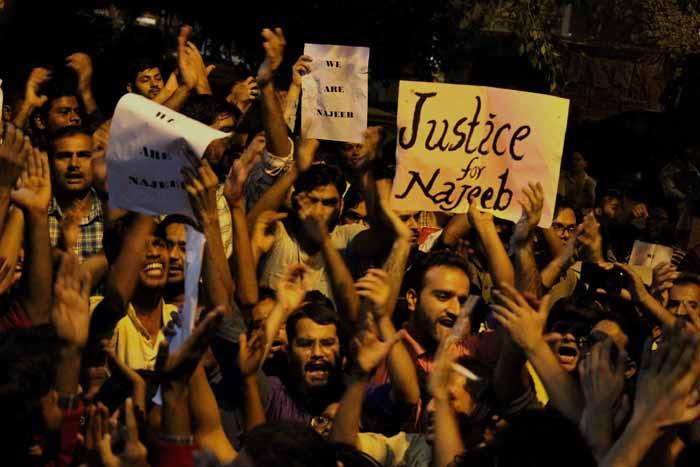 In light of all the above facts, it is imperative that we assert our presence as minority students, as students who still believe in ensuring social justice and empowerment for minorities. It is imperative that we connect JNU to the larger patters of anti-Muslim acts of hatred and slaughter that the country is now witnessing on an everyday basis.

Let voices of sanity and solidarity prevail, not for any pretence of progressivism or for electoral vote bank politics, but for genuine measures of empowerment.