Kudos to BJP/RSS for its propoganda machinery’s brilliance. All Political parties nation wide especially the Left Govt led by Mr. Pinarayi Vijayan has a lot to learn from them on how to stage manage events.

All you need to do is checkout the twitter handle of NWC . You will see how she started off her Kerala visit by first of all visiting the “” victims of forced conversion in Kerala” …Shruthi, the second accused in the Thripunithura Torture Centre / ghar vapasi centre case is seen in pictures uploaded by NWC with the above mentioned caption.

And if you are wondering and not connecting why the narrative is upside down… , google what Rekha Sarma was up to until being appointed as the acting NWC chairperson . She was the former Media in Charge for BJP in Harayana, and and chief campaigner for Modi’s ‘Chai Pe Charcha’ campaign.

Should things be any more clearer why ” Hadiya is happy” and would have been taken out for a spin by the NWC chairperson herself, had not the media been in attendance. 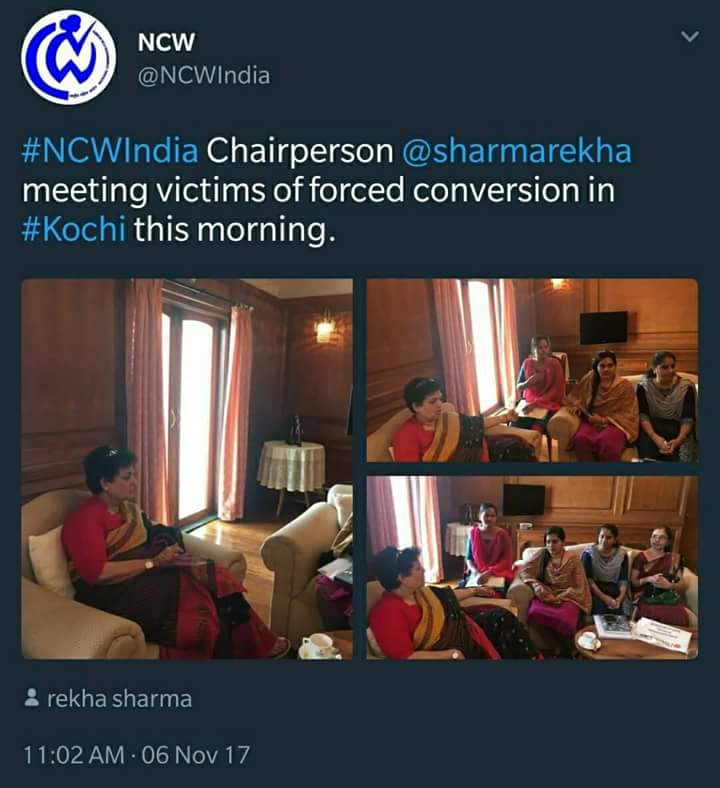 The RSS/BJP has sent in its stooges to

1. De-legitimise Hadiya’s own video recorded narrative that she is being tortured by her parents of that she might be killed by her Father.

2. To step up its communal pitch that forced conversions are happening in Kerala in spite of repeated reports being filed by the police that no proof of such organised conversions exist.

3. Rahul Easwar is not proving enough to propagate the forced conversion scare on national media hence a new Proxy – the NWC itself.