A great moment in the history of Dalit and Muslim relations has suffered another serious setback.

When an upstart online news organisation wrote a story that Radhika Vemula alleged that the (Indian Union of) Muslim League “used” her for “political gain” by offering to give 15 lakh to build a home for them in Guntur, where the family lives, many mainstream newspapers picked up the story, and merely reproduced with their own twists and exaggerations to beat the much-hated Muslim League party with this most powerful stick. It looked as if what was an inspiring gesture of Dalit Muslim mutual solidarity, a cause for which Rohith Vemula sacrificed his life, is now in tatters, of cynicism and despair.

This most natural idea and therefore the most difficult practice, of Dalit Muslim unity, is something no one wants, surely the establishment that stands to lose the most.

And also the prominent thought leaders of either Dalits or Muslims, averse or unwilling to accept the inconvenience of compromises necessarily involved in building this unity and the labor of mutual understanding necessary for it, always look for such an opportunity, which this expose and controversy provided. One can say, as indeed some privately did, that this is what happens when Dalits and Muslims come together. Muslim’s act in bad faith, Dalits are ungrateful or greedy.

Dalit Muslim unity would demand a reconfiguration of all that Muslim and Dalit community leaders and intellectuals painstakingly constructed and into the business of spreading among their respective communities. Suffering in the hands of the same enemy of Hindu nazis provides the solid ground for this solidarity but the different direction and temperament of each group is not easy to coordinate.

Ethics of conceiving and constructing such multiply asymmetric solidarities and coordination between the Dalits and Muslims are often without models, guidelines, plagued by a lack of conviction, failures and breakdowns of the previous attempts, cynicism and distrust based on them, unwillingness typical of two most publicly un-self-critical thought leaders of the two communities.

So, such condition leaves the ground for circumventing the problem via foregrounding of the simplicities of unity, and reduction of this unity to the limited realms of social movements or voting in elections.

There are in fact some votaries of this unity who think it is better to keep it at a practical level of voting behaviour or limited social movement campaigns and not attempting to push it to the cultural and everyday stage.

When the martyr for the cause of Muslim-Dalit unity, Rohith Vemula, was persecuted by University administration at the behest of many members of the Union Ministry and functionaries of the ruling party, resulting in his death, some Muslim student leaders of Ambedkar Students Association of Hyderabad persuaded the leaders of the most powerful Muslim party in the Hindu nation, the IUML, to step in with a magnanimous act of generosity and acknowledgement of memory of Rohith Vemula, to build a home for Rohith’s family. And the president of the party and the president of their youth wing came to Radhikamma to express their solidarity, it was a moving moment of hope, inspiring show of humane and serious solidarity that inspired everyone.

That high-point of the Dalit Muslim relations of a Dalit Marxist student leader dying fighting against Islamophobia seemed to continue with no less commitment, this time from the Muslim side. It had finally taken two for the claps of jubilation of Dalit Muslim solidarity. It was not a case of the generosity of a political party toward a victim’s family but one of an affirmation of solidarity and support from the whole Muslim community to the whole Dalit community.

With the news piece of Radhika Vemula accusing Muslim League and its amplification by the mainstream media and their further propagandistic twists of the ruling party representatives and the predictable yet no less disgusting online Hindu Nazi troll activity, the damage, damage to the very idea of Dalit Muslim unity seems incalculable. Correspondingly, the reconstruction must also be as deep and huge in its scope. Thinking is nothing if not also rethinking. All building in human affairs is also rebuilding.

The fact remains that it was the alleged allegation of Radhika Vemula brought this into public, it is also indisputable that the promised money from Muslim League made in Feb 2016 but the very first two instalments of checks were issued in 2018, after more than two years. Then what about these inconvenient facts? Isn’t it a failure on Muslim League’s part to deliver or at least delay, its promise?

There is an important element missed out by most media tackling of this issue:

Remember the fact that Rohith’s mother was not allowed even to attend the secret funeral the police conducted and then the family organized a Buddhist final rite for Rohith. Kaki Madhava Rao, the former chief secretary of Andhra Pradesh and the chairman of SC and ST (IAS, IPS) Officers Forum who attended it promised that his forum owns a site in Guntur a part of which would be donated to Radhikamma Garu. He also arranged for taking the family to the site by forum functionaries. It is out in public and many thought that first time SC and ST Dalit officials showed some decent public spirit. Madhava Rao garu also arranged an official (not any IAS or IPS) to make the arrangements and to be a contact person.

Upon hearing the news that Civil Servants organization is giving land, Muslim League president himself, along with the president of its Youth Wing, visited Radhikamma in Guntur and promised the money to build a house, including the availability of the architects for planning and urged her to get the promised plot and complete the legal formalities to transfer ownership to her. ML officials also kept on finding out from the family from time to time to check the status. Meanwhile, the SC and ST officers’ forum never transferred the land to her, the contact person didn’t even take the family’s calls. It is only after such hundreds of calls declined by the Dalit officers’ Forum, Radhikamma’s family tried to find out if they could buy a piece of land with the money ML offered. 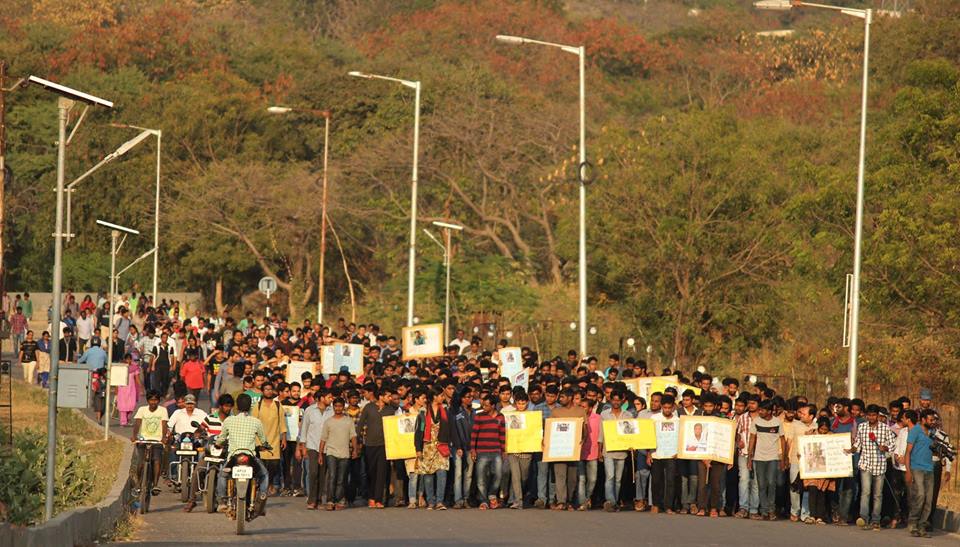 These officers, who never fulfilled the constitutional provisions and supports for Dalits as much as they could, behaved exactly the same way even working together voluntarily as a social service organisation. If you are not blinded by islamophobia or a “secular” hater of a Muslim League or against the larger cause of Dalit Muslim unity and corresponding loss of upper caste Hindu monopoly over the fight against Hindu Nazis, you can very well see it.

As a journalist once myself, in the spirit of self-criticism, let me offer criticism of my own profession: the journalists trying to get closer of the victim’s family and then almost becoming intimates is already a tricky issue. But they must under all circumstances maintain the strict separation from the informal sharing of fleeting or private views and feelings from the public statements. It is not just about professional ethics, which it of course is.

If it is not a Muslim party and Radhikamma is a Dalit woman, the journalist’s would have at least checked with her what they are writing about the informal talks they had with her. Dalit women’s bodies to minds and even victimization, for millennia, are treated as an inert objects anybody can claim or mold or use and abuse the way they please without consulting the Dalit women, often against their express opposition. This time it hit the real moral leader of the Indian resistance against Hindu nazis because she happened to be a Dalit woman, despairingly perpetrated by the casual callousness of the well-meaning journalist upstarts.

This larger problem, these journalists, particularly well-meaning ones, should be alert to. This is at the core of the controversy created by journalists with recklessness and unprofessionalism and a contempt for Dalit woman’s privacy and trust and Islam-baiting irresponsibility.

Chittibabu Padavala is a Dalit Activist and Journalist