Azhar Teli passes the ball to Mehraj Ahmad. Mehraj moves it closer to the goal area. Three Iqbal Hygam FC opponents tail him. The playground is filled with cheers for Mehraj, “Go Mehraj Go!”. Mehraj takes a second touch and scores a goal for Amberpora FC within 10 minutes of the first half. The 2,000-odd spectators burst into cheers, jumping, and dancing.

With the sunset in the Hygam area of North Kashmir’s Baramulla district, hundreds of young men and boys from across the region can be seen running towards a football field in the periphery of the town. They spend at least two hours at this field under floodlights. Since early June, the area has hosted the 16-team, 7a7 side ‘Fifa Super Cup – under lights’. 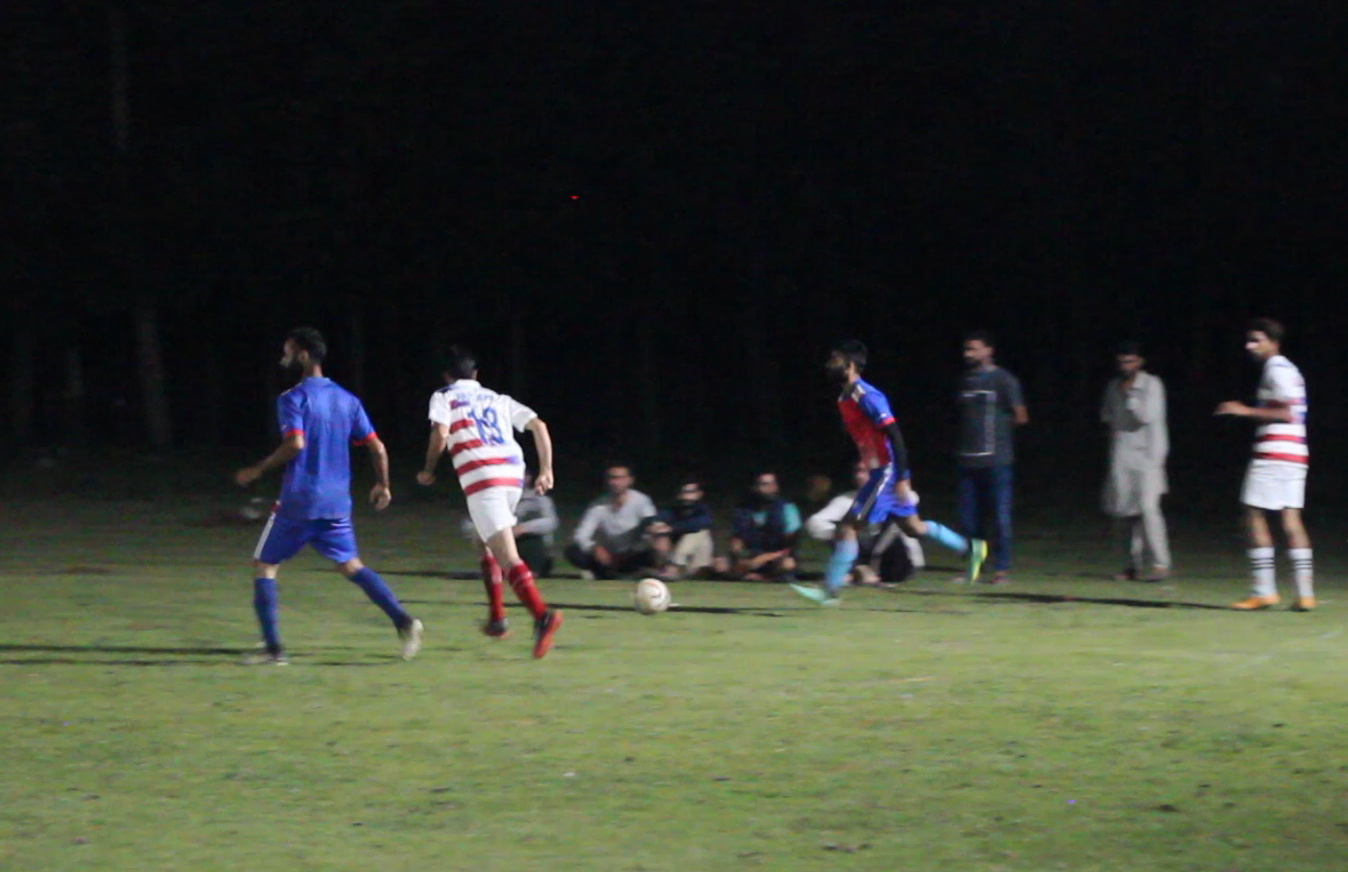 As Kashmir heads towards one year of lockdown after the abrogation of Article 370 from the Indian constitution, imposed in August last year, many have become victims of depression due to continuous violence in the state. As a respite, many football lovers in the Hygam area of North Kashmir’s Baramulla district have taken up the initiative of organising night football for the youth.

Total 16 teams from different districts of Kashmir are participating in the floodlight tournament. Due to the crappy conditions of the ground, the tournament is organised on the basics of 7a7 side rule, which allows only eleven players in a team, with seven players playing in the ground and three in substitution. 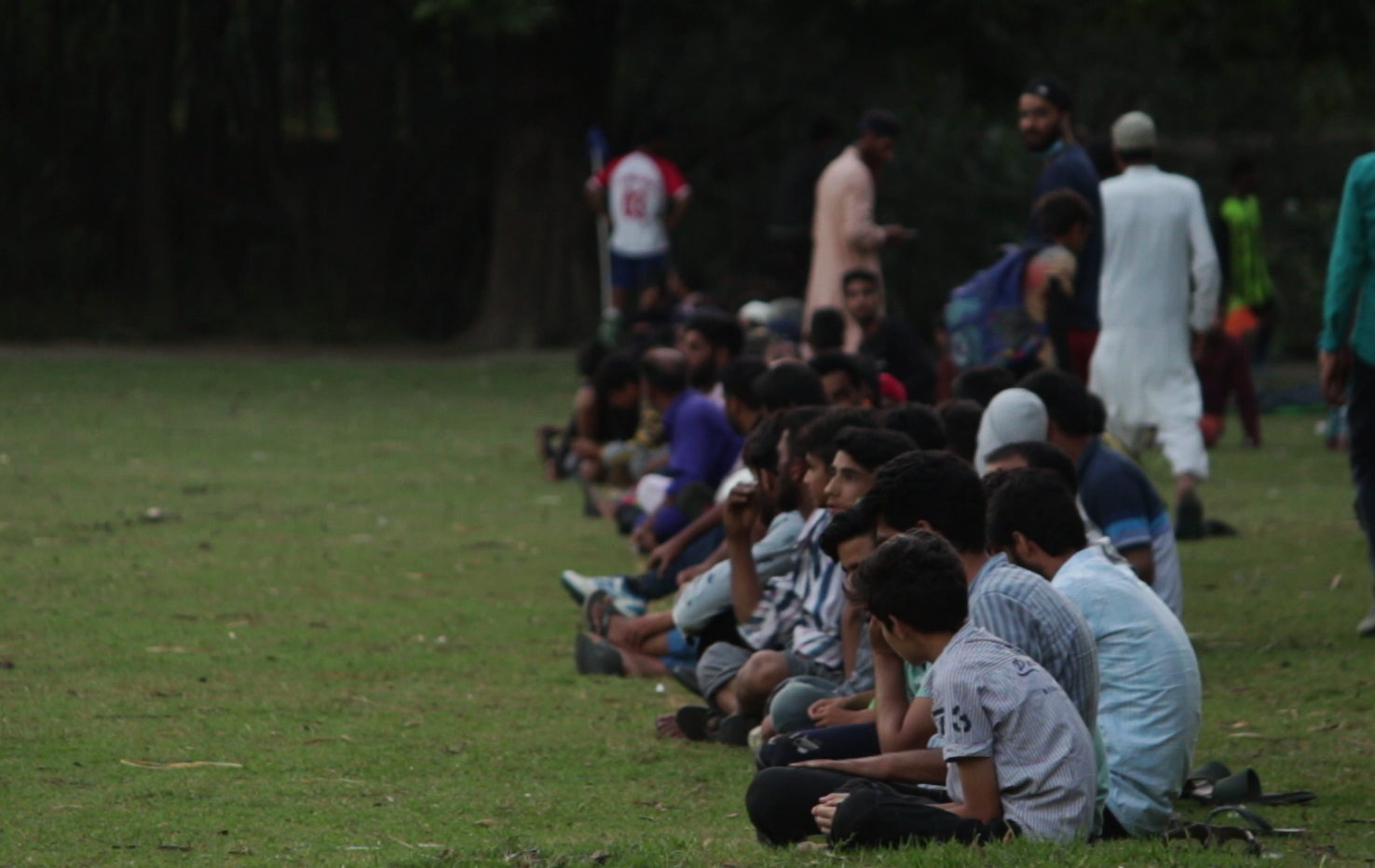 A match against trauma

For people in Kashmir, where life is strained by heavy troop presence and an armed insurgency, watching and playing football is more than just a source of entertainment. It offers an escape from the grinding reality of everyday life in the Valley. Kashmir’s love for football is well known. Elders share tales of how they would climb the tall chinar trees around stadiums to watch matches in the 1980s and ’90s and spend hours in harsh winters playing football.

“Since 4th August 2019, all the sports activities in the Valley have been paralysed. With continuous lockdown due to Covid-19, stress levels among the youth are on the rise. To ease their stress level, I along with some ex-football players, took the initiative to start a night football tournament in our area” says Waheed Samad, organiser of the tournament. 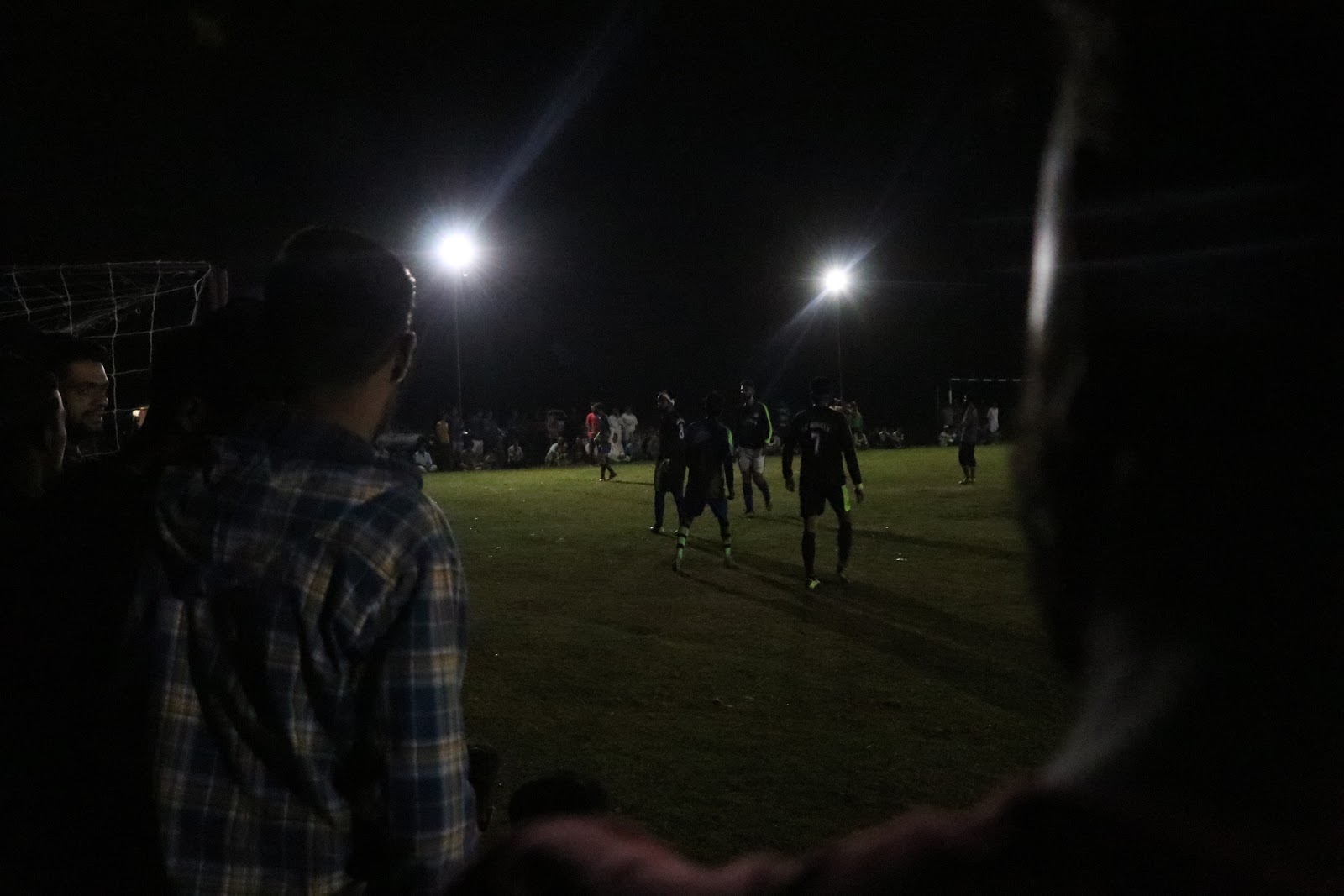 But all these sports activities came to a halt when the Indian government, last year, scrapped Article 370 which was followed by a complete lockdown in the valley. Further lockdown due to the Covid-19 pandemic this year had put a halt to now almost-ritualistic football matches.

North Kashmir does not have a well-established venue for sports and arrangements for night football. The reason for this is the bad infrastructure and the security situation. The locals in the area have joined hands and contributed money from their own pockets to set-up high-voltage floodlights, on four sides of a vacant patch of land at the Shallibagh area of Hygam.

“We have installed these lights from our own pocket, and we have also kept a backup power supply,” adds Waheed.

Hygam area is mostly surrounded by dense forests, during the late 90’s, it used to be the shelter for the Ikhwan-ul-Muslimeen ( A militant organisation group sided with Indian security forces ). One of Kashmir’s famous wetlands “Rakhi-Hygam” lies near the playground, which attracts thousands of migratory birds during winters. Since the lockdown was imposed, many young boys from the area used the playground for drugs, but the tournament has made that impossible now. 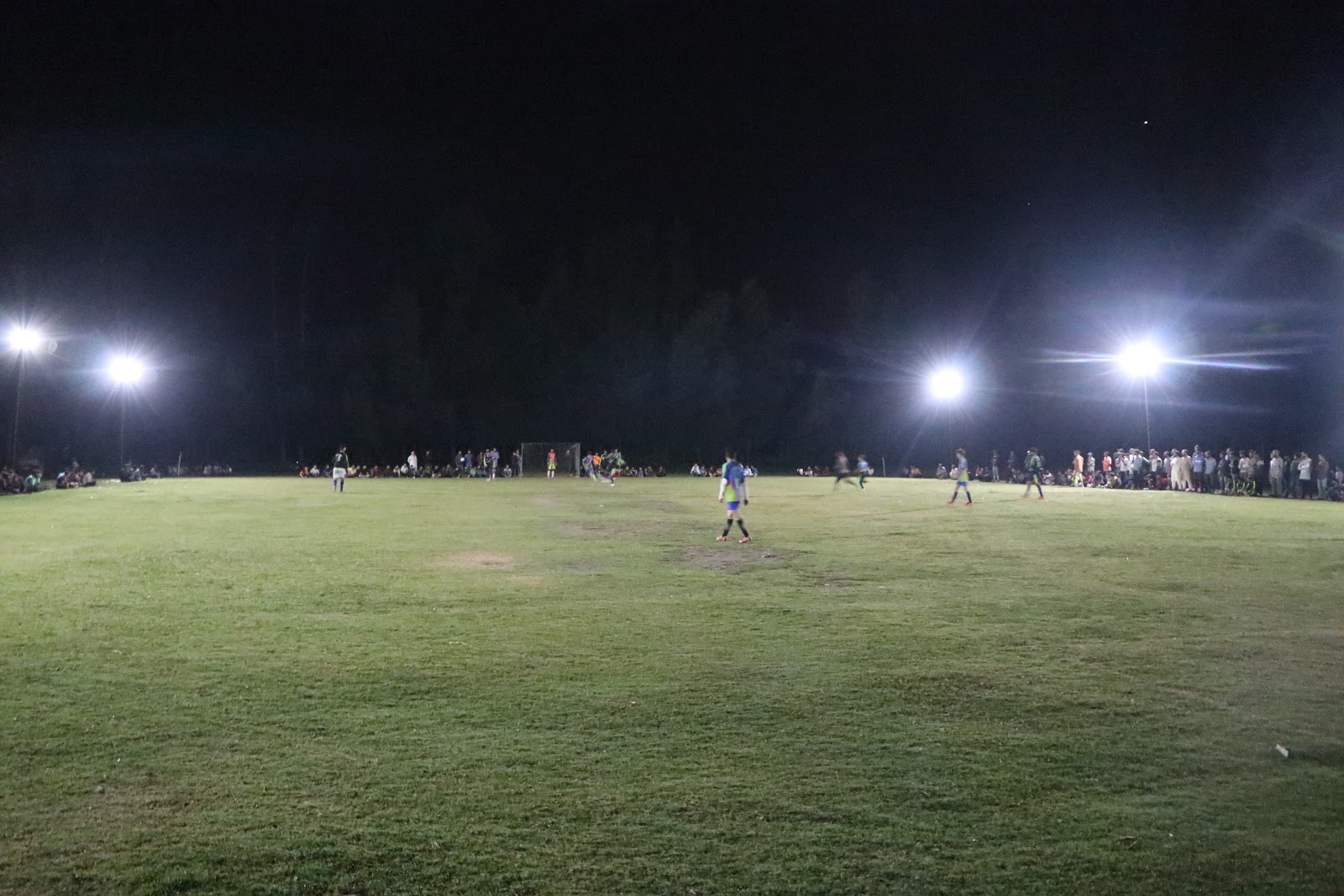 “These initiatives will also keep the young budding talent away from the drug menace, which is on the rise in Kashmir” says Manan Showkat, a local football player.

A source of Income

Apart from relief from depression and drug menace, these football tournaments have also provided the local people with earning opportunities. For Manzoor Ahmad Khuroo, a local Aloo Munja ( Fried potato chips ) seller, the tournament has provided him the opportunity to earn some money to feed the family. Before the lockdown, he used to cook at marriage ceremonies as a traditional chef ( Waza ). With no marriages taking place in the Valley, he now sells his potato chips during the football matches. 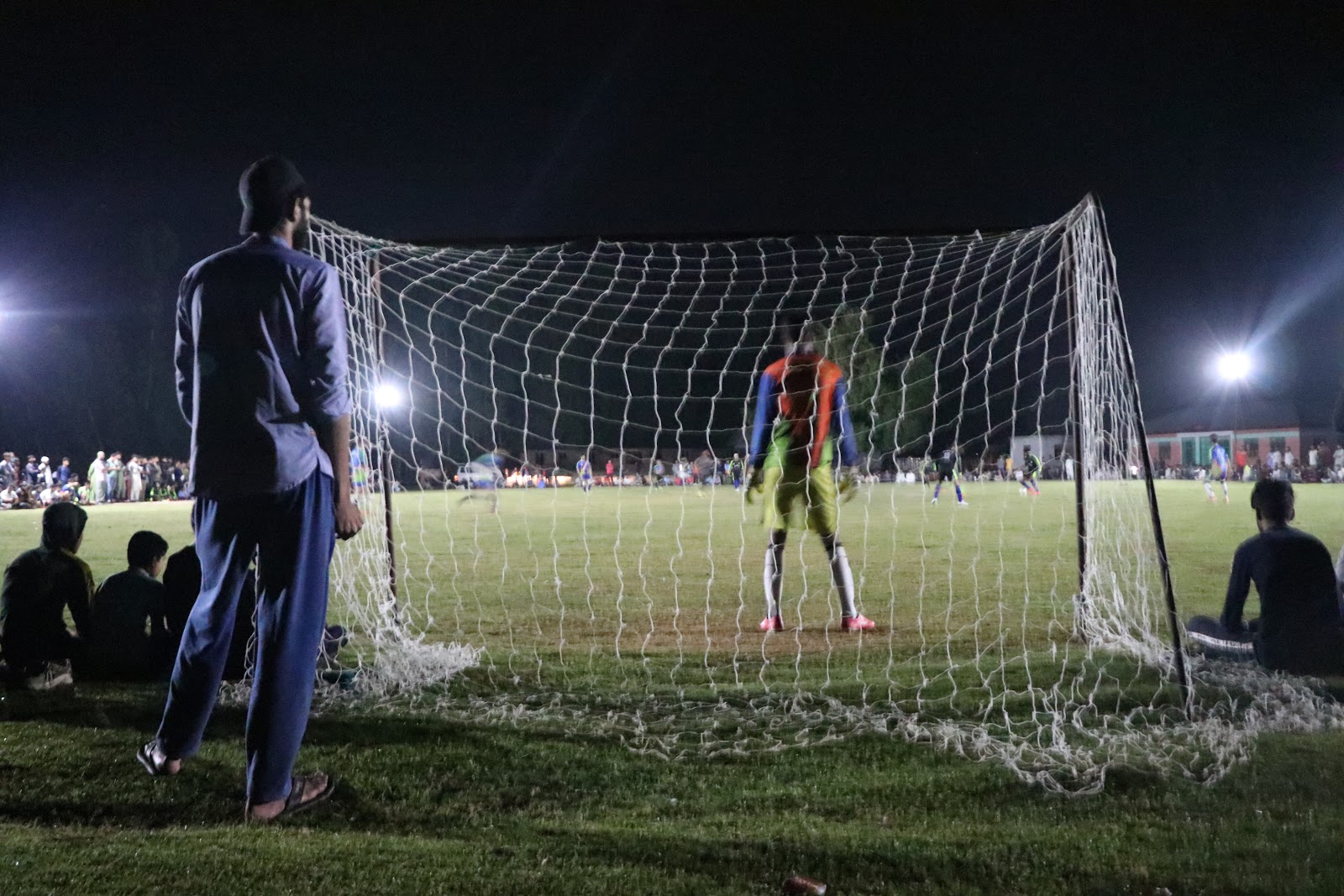 “I used to cook at marriage ceremonies, earning enough to feed my family, with continuous shutdown from August. I did not have enough sources to feed my children, but this tournament came as a ray of hope for me, as I earn three to four thousand Rupees every night depending upon the crowd in the ground” says Khuroo.

Night football has been popular in the valley prior to this, too. Tournaments have been played in Srinagar and Sopore town back in 2018. Since the abrogation of Article 370, all the sports activities were on a freeze in Kashmir, but with little restrictions in the lockdown, many sports lovers have restarted the sports activities, keeping in mind the norms of social distancing.

Qayoom Jehangar, a local sports journalist, seems to have a busy schedule uploading different sports activities across the valley on the local sports channel “sports hub”, which he maintains on Facebook and YouTube. His attempts to broadcast the match to a larger audience mostly fail due to slow internet connection in the valley.

“For the last fifteen minutes, I’ve been trying to go live on Facebook, which I usually do whenever a match is going on, but today it seems that I have to put my phone in my pocket and enjoy the game, as the internet is really slow,” says Jehangar.

Preparations could be seen in full swing in the Handwara area of North Kashmir, 45 km from Hygam, near the Line of Control (LOC) where some football enthusiasts are also preparing to organise night football in the next month. 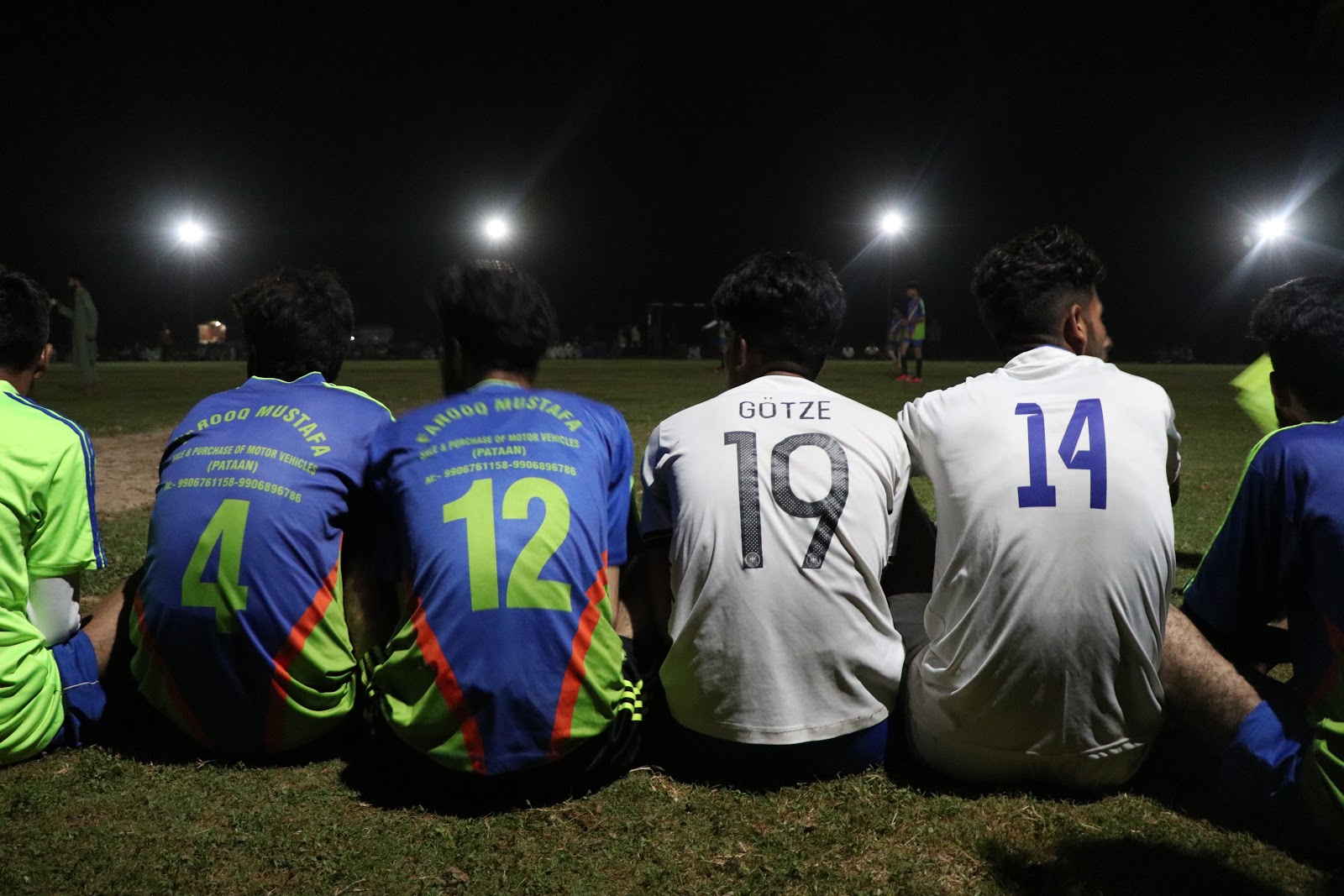 “We are going to organise a 32-team night tournament in the area in the next month. Our main motive is to keep the youth busy in sports activities, who have gone through deep stress in their lives due to violence in the past”, says an organiser, who wishes not to be named.

Aaqib Fayaz is a student of Convergent Journalism in AJK MCRC of Jamia Millia Islamia.