Being political in an otherwise apolitical crowd has proven to be tough in the past and continues to be so even after today’s violence. Engaging in debates with the followers of a dogma that contradicts one’s own is easier than tackling the arguments that come from an apolitical segment, as those individuals always rest their foot on a very privileged and comfortable position in the social structure.They silently nod their heads when zealots of our ‘nation’ negate the space of speech and debate, thereby neglecting the resentment of others. As their political and social necessities are guaranteed or safely assured,they are threatened when that very assurance is questioned, consequently demanding obedience and submission to the tricolour.

Revisiting the incidents from the past year that made India infamous for the country’s approach to it’s minorities,one can clearly observe a modus-operandi which executes the blame on the victim for instigating the conflict whilst the tormentor escapes under the of an unidentifiable mob or an inapprehensible system. Akhlaq from Dadri and Rohit Vemula from HCU were all the victims of such that their loyalty to state were subjected to test before the investigation of premises which lead to their unfortunate demise.The idea of the Indian nation state or the Bharat Mata that the Sangh Parivar posits demands such loyalty or forced patriotism,the terms of which can only be satisfied by those privileged who can be apolitical or fanatics of the Sangh.The rest who detest are confined to the labels of anti-nationals with a rather clever method of appropriation of nationalism by the Right.National Anthem,National Flag or anything for that matter are imposed relentlessly from private space to public space,thus instilling the image of state in one’s conscious. 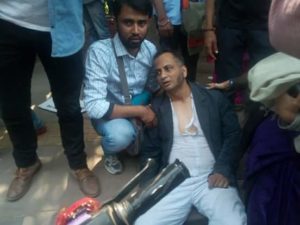 Slogans of bharat mata have been misappropriated from its representation of a country to mob’s chants accompanied with violence. The very same chants that were heard when mobs haunted and killed people who didn’t conform to their idea of the nation, have taken their place in campuses, haunting and killing rohits and najeebs.A very recent incident of such was today’s conflict at Ramjas College of Delhi University which showcased hooliganism in it’s peek.The two day seminar at Ramjas was to be held under a panel which had Umar khalid from JNU as a panelist.The seminar was disrupted by ABVP,a students’ organisation of sangh,vandalizing the conference room.Today was the second day of the seminar which was again disrupted by ABVP and which resulted into a conflict between the students,teachers and ABVP.The power of those chants and slogans and the terror it had caused were more dangerous and infectious than the pelting stones and ABVP goons.

How these slogans go about internalizing in oneself the setup of a violent dogma is something to be seriously looked upon. It is ironic, when a students’ organisation continuously assails upon those students and teachers who have tried to engage the former in very democratic spaces, now turn out holding the tricolour which promises equality and sovereignty. When the same bunch demand freedom of speech and expression through their dialogues whilst holding a stone in one hand and the tricolour in the other, rationality is eroded. Chants of a great nation promise a verbal utopia, only to be followed by sexist, racist and casteist abuse, leaving one to wonder and differentiate. From a teacher who was stalled from the shock of having had to witness colleagues getting hurt by their own students, to a fellow friend who was injured by the mob’s stone-pelting, all were labelled outcasts when the tricolour was cast right above the police van. When the same modus operandi from the past is repeated here and the police help the goons in achieving their targets, democracy shrinks into nothingness. Today’s events marked a time in history for our campuses, where regardless of being open, students fought back within those very limits, when apolitcals learnt of the necessity to being political, when pebbles of cowardice met stones of determination.

When voices of dissent are labelled and negated, the only thing that remains is the hope to fight back, but an advice from a concerned friend which had me flee from the area still echoes,
“Dont die before your voice is heard”