Myanmar, formerly known as Burma, has a population of around 51 million people. The Burman ethnic group constitutes around two-thirds of this figure and controls the military and the government. But there are also more than 135 ethnic groups in the country, each with their own culture.

Many of them have become internally displaced by government moves to exploit land, provoking long-standing friction.

In fact, the conflict between Myanmar’s ethnic minorities and the ruling Burmese majority represent one of the world’s longest ongoing conflicts.

One group, the Muslim Rohingya, are not recognised as an ethnic nationality of Myanmar, so they suffer from arguably the worst discrimination and human rightsabuses of all. The Rohingya population is somewhere between one and two million and they are living mainly in Rakhine State in the north of the country.

In this film, Al Jazeera Arabic correspondent Salam Hindawi goes to Myanmar to investigate the situation surrounding the Rohingya.

Myanmar has been tightly controlled for decades and Hindawi has enormous difficulties gaining access to certain areas of the country that the government simply doesn’t want anyone from outside to see.

“I think the military and the government are blocking people from going into northern Maungdaw [a majority Rohingya town], because they have something really horrible to hide,” says David Mathieson, a former director of Human Rights Watch in Myanmar and now an independent analyst and observer.

“There are signs of this in satellite pictures and by the government’s own admission and through credible reporting coming out of the area, saying there have been extensive human rights violations. They want to hide the extent of the abuses against the civilian population. It’s a cover-up,” he says.

In 2012, the capital of Rakhine state, Sittwe, saw a wave of violence in which hundreds of Rohingya were killed and tens of thousands forced to leave their homes and move to camps. 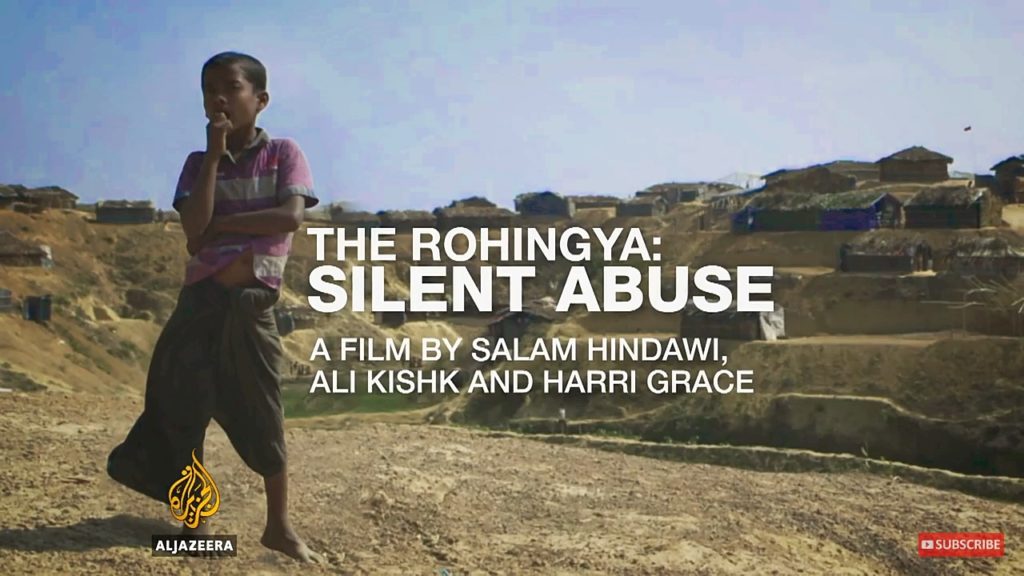 “Our houses were burned down by the Rakhine people,” says Sander Win, a Rohingya refugee. “We stayed at a friend’s house and were then sent here. I’ve been here for five or six years.”

Muhammed Yasin, the so-called camp doctor, says: “Our lives are very difficult. All our houses have been destroyed. In cold weather, we sleep on the floor … our children get diseases and die.”

The government restricts their movement, ability to marry and access to education and healthcare. The refugees Hindawi met seemed to have been in the camp for years – and the children appeared to never have lived anywhere else.

At the heart of the Rohingya’s problems lie Myanmar’s citizenship laws which deny them full nationality and therefore rights. This mirrors the widespread official and public prejudice against them.

“As a Buddhist, I feel sorry for them,” says Buddhist monk U Par Mount Kha. “But these Muslims living in Myanmar, we can’t just look at their human rights. They’re not qualified to be citizens under our citizenship law … If we let them out, the terrorist attacks will increase in Myanmar. There are 57 Islamic countries in the world, so if the leaders of those countries would take these people into their countries, there will be no problems in our country at all. We should consider that idea.”

This discrimination has created tension and in October 2016 at least nine police officers were killed and four injured in multiple assaults along Myanmar’s border with Bangladesh. The attackers were identified only as “terrorists” but were believed to belong to an armed Muslim group.

There was an immediate violent backlash and the army began a siege on Maungdaw. There were reports of mass killings, torture, rape – and of tens of thousands of Rohingya sought refuge in neighbouring Bangladesh.
The government says these reports are exaggerated – but the UN has since reported a raft of human rights violations. It has even gone as far as suggesting that Myanmar’s strategy may be to expel the Rohingya altogether. It announced a fact-finding mission to Myanmar but the government said in June that it would deny entry to officials taking part in the UN investigation. Former Nobel Peace Prize winner Aung San Suu Kyi now holds the post of State Counsellor and is effectively the head of the Myanmar government. But since her days as an anti-government campaigner, she has been accused of ignoring the plight of the Rohingya in Rakhine state.

“[Aung San Suu Kyi] stays relatively silent about the abuses going on,” says Mathieson. “She’s really been absent when her voice as a leader needs to be heard.”